I Heart Rollercoasters and my Sweet Husband

Back in June, Duncan and I were married for six years. Duncan, who claims it's because he isn't creative, uses the traditional anniversary gifts as a guide on what to get me. I think it's pretty creative. Enough gushing about how wonderful my husband is.
I had mentioned that I wanted to ride rollercoasters for our anniversary this year. So, when Duncan looked up the gift for year six, he saw that it was iron (which is the major component in steel, which is what many rollercoasters are made of, how convenient!) he knew just what to get me: a trip to Six Flags America!! Since Violet isn't the best when it comes to taking breast milk from a bottle, we put it off and put it off and finally nailed down the date of October 21.
It was a great time. We rode the Joker's Jinx, Superman, Two Face: The Flip Side, The Wild One, and Roar. I learned that I can only handle so many rollercoasters in one day before I reach my limit. Roar did me in. We got some dinner and a funnel cake and the headed out to catch a movie. We saw The Departed. It was pretty good, although it became quite a blood bath at the end--that was a bit much. We enjoyed seeing a movie in the theater, which is something we hardly ever get to.
We realized we need to get out more, for Violet's sake. She is hardly ever NOT with me and it's quite difficult for her to be away from me, it seems. She didn't take milk from the bottle again. My mom said Violet looked at her like she was crazy for trying to make her do such a thing. I love my sweet Violet Ella, but she needs to learn that others can care for her too.
This post is a total ramble. Part of the problem is that I've been constructing it in my head for a couple of days and haven't had a chance to put it together until now and there's lots I wanted to say and not a lot of time and it's all jumbled and I need to stop now.
We had a great time celebrating our anniversary. I love my husband.
**Funny sidenote: read here about how we celebrated our fifth anniversary last October. (Yes, we were married in June. This seems to be becoming a tradition!)
Posted by Nancy at 9:07 PM 1 comment: 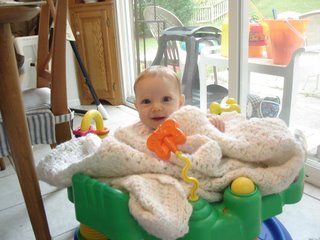 Violet is now beyond 8 months old and is developing like crazy. Here are some recent exciting events:
We are so thrilled to watch sweet Violet grow and change, nearly every day. She brings such joy to our lives! 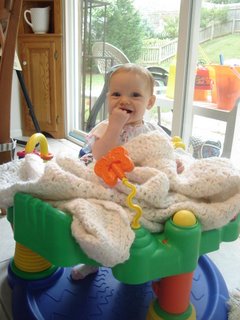 That's right, folks. I've finally hit the all-important milestone birthday: 30....and 3/4. See, my 30th birthday was back in January. The 15th, to be exact. Violet Ella was born on February 2, about 2 and a half weeks after the my big 3-0. I was in NO condition to celebrate back then. Violet weighed 10lbs. 10.5 oz. and I had an additional 40 lbs. other places on my body, so I didn't much feel like being a guest of honor for any reason. So, we put off a party, thinking we'd do something in July, when I was 30 and a half. That didn't happen either. In July, however, I made the decision that since I love autumn so much, we'd have a celebration then. My 30 and 3/4 birthday fell on October 15th, which was Sunday, so we scheduled a party for Saturday the 14th. It was silly, but fun. Had some of my family and some friends here as well as an outdoor fireplace and one of my all time favorites: Red Hot and Blue. I had a great time and think others did as well. Here are a few peeks at the gathering. 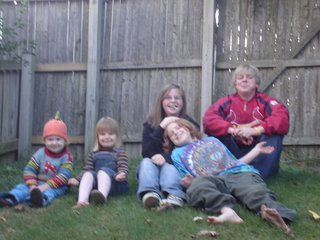 Some of the "kids," big and small. (L-R: Amelie, Addie (friend from church) niece Megan and nephews Jack and Patrick) 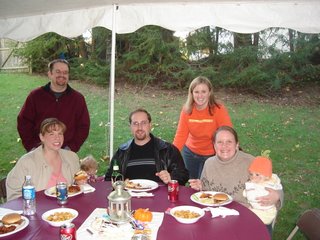 Some of the friends and me. (Back row: Chris and Becky--friends from church [Chris' wife, Joy, took just about all of the pics.] Front row: Heather and her husband Martin. Me and Violet.) 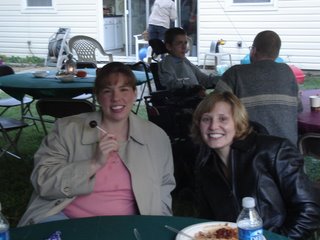 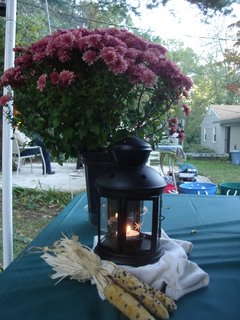 A decoration--mums and lanterns and Indian Corn--I love the fall!! 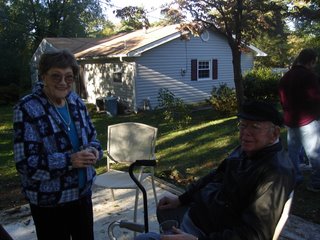 My dear, sweet grandparents surprised us by coming and then spending time outside, even! Here they're enjoying our new "party patio," which formerly contained our shed and now houses our new outdoor fireplace.


Here my nephew, Jack, looks on as I cut the gorgeous cake provided by my Aunt Carol. 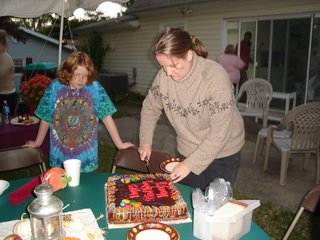 The Life (and Death) of a Shed

We moved into our home in the beginning of May 2002. When we looked at our house, before buying it, we made the decision, should this home become ours, we would get rid of the nasty, rusty, metal shed that seemed to take up a quarter of the back yard. It seemed like a big job and got shoved to the back burner for a while, before we even seriously talked about getting rid of it. I always, however, felt the need to apoligize for the shed, when someone visited our home and looked out the sliding glass door. "Nice shed, huh?" I'd say. "We want to get rid of it. We've never put anything it on purpose, so it would be easier to let go of, when the time comes." Well, the time finally came this past weekend. On Saturday, Duncan removed the roof and on Monday, Duncan, our new neighbor and his father-in-law, got rid of it once and for all. We are now left with a fairly descent concrete slab and a source of elecricity. Our ultimate dream to is to build a detached screened-in porch to sit in during the summertime and even for a bit of the spring and fall, perhaps. But, that takes money. So, we'll hold off until we've got enough of that to take on such a venture. In the meantime, we plan to enjoy this reclaimed portion of our property.
The process is captured in photos below.
[Note: I can't seem to figure out how to post photos so the are displayed in the correct sequential order. It's kind of annoying. Any hints out there from you more seasoned bloggers?] 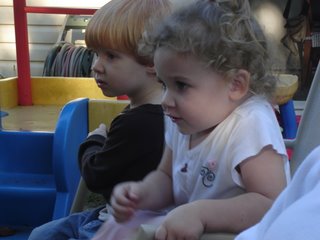 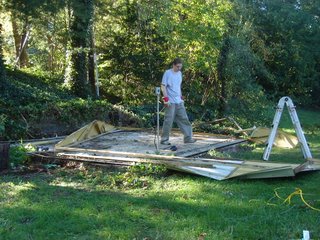 Intact shed without a roof. 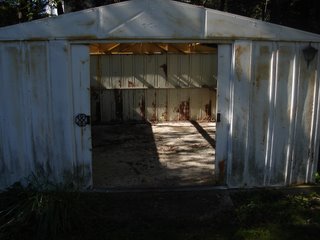 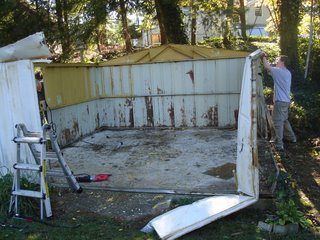 a view from the inside 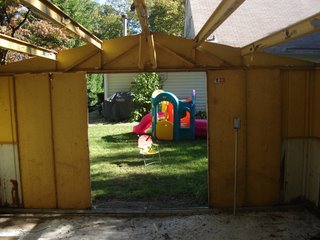 Ain't she a beauty? 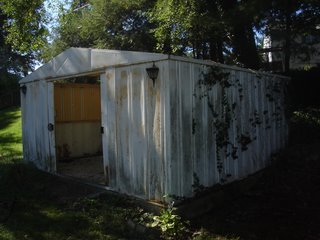 As promised-- the Little Tikes 8-in-1 Playground. It's a beast. 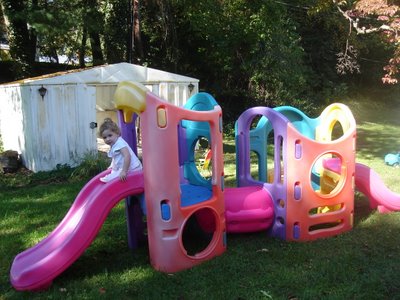 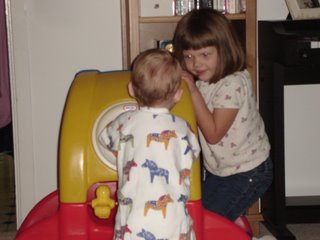 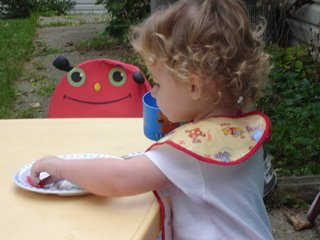 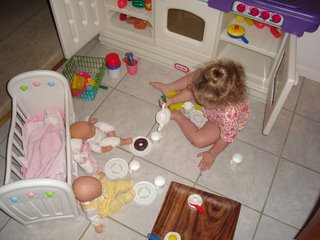 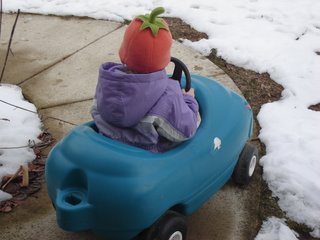 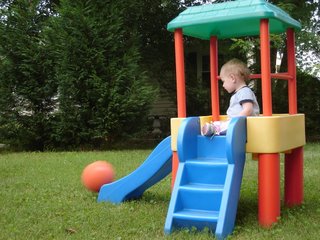 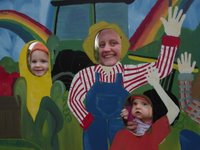 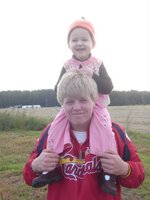 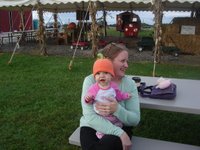 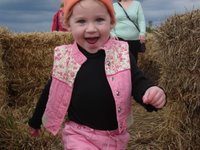 I love sitemeter. I can tell many of you have been checking to see if I've updated, but to no avail! I have MANY things I'd like to write about and will hopefully get a chance to do so soon. The main reason for my lack of posts of late has to do with the fact that I found a direct corellation of frequent posts = dirty house. So, I've been trying to have a more balanced approach to life these days. Above are some pictures from our visit to the pumpkin patch out in Easton this past Saturday. It was a great time with the McDermotts. Consider leaving comments if you never have before. It's fun to get feedback and responses to what I write.
Happy 20th Anniversary, Karen and Dan!! Oh-- and shut up, Erin.
Posted by Nancy at 1:19 PM 4 comments: