All around, a much better experience than the H1N1-oween of last year!
Posted by Nancy at 9:16 PM No comments: 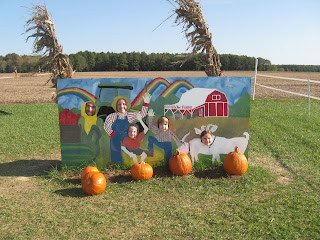 FAIL!
We had a fabuloso time at Counsell Farms, as always, with the McDermotts, however.
Thanks, y'all!
Posted by Nancy at 8:12 PM 1 comment: 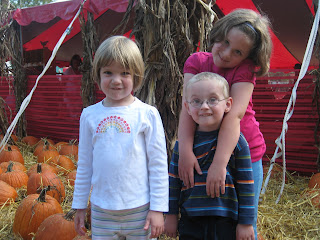 Sock Me in the Stomach, Why Dontcha.

"It just feels better when someone tucks me in."
That would be my biggest girl.  Amelie.  My sweet one who carries the weight of the world on her shoulders.  The one who was the oldest of three at the ripe old age of three and a half.  The one who I shoo off when she asks to be tucked in again, after getting up from bed for whatever reason.  "You're a big girl."  I chide.  "You can handle it."  "I've already tucked you in!"  "Go!"  I demand.  Ugh.

She's only six and a half!  She's only in first grade!
She isn't perfect, by any means.  But she is so good to her younger sister and brother.  She is so helpful to me in so many ways.  And while I don't want her to grow up too fast (She still likes to watch Barney.  shhh... don't tell anyone!) I do require a lot of her.  She's very mature in many ways and has always been very pensive.  She's compassionate and passionate and has really big feelings for someone so small.  But:

So what is this mystery word?

If you haven't had a chance to read the riddle yet, here it is again:
There's a word in the English language which ends in "s" and is masculine plural.  When you add an "s," it turns into feminine singular.  What is it?
And now for a hint-- 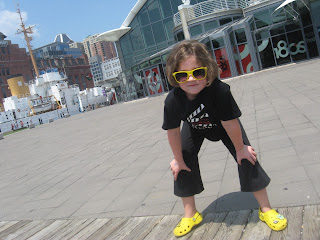 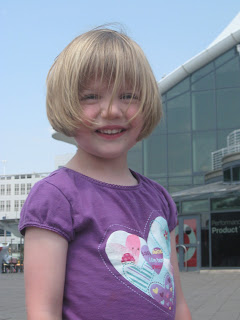 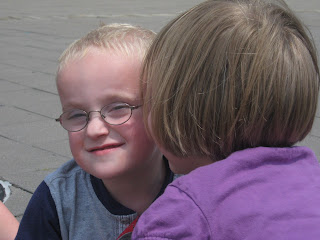 Do you have it yet?

It's:
Princes and Princess
Neato, huh?
I thought so.
Thanks to Lynn (who inspired the idea for this post and correctly answered via text), Missy, and Jocelyn for playing along and answering correctly!
Guess, what?  You each have won a prize!
Lynn gets unlimited babysitting, whenever mutually agreeable.  (Oh, wait, she already has that.)
Jocelyn gets on-the-spot-at-our-home care for her family if she and her husband ever happen to be struck with food poisoning while visiting us.  (Well, she already got that back in December of 2008.)
And Missy gets two mornings of free childcare for her two or three sweet little girls(she chooses whether or not to share her brand new peanut with me), whenever we can mutually agree upon some dates. (And that is actually a prize!  For serious!)
So congratulations, ladies!  And thanks for being faithful readers, commenters, and, most importantly, in-real-life friends.


See what happens when you play along here at Tulipa Murillo?  You may even win something!  (And don't remind me about those cookies for my 200th post.  I'm such a loser.  Obviously, I need to give away mostly prizes that I've previously given to the winners.  It's the ultimate in re-gifting, I suppose.)
Posted by Nancy at 2:58 PM 1 comment:

Inspired by Lynn's post of yesterday, I thought I'd share my favorite riddle with y'all.  I heard it many years ago on Car Talk on NPR.  This was one of their Puzzlers.
Here goes:

There's a word in the English language which ends in "s" and is masculine plural.  When you add an "s," it turns into feminine singular.  What is it?

As always, I moderate all comments.  I won't approve any until tomorrow night.  That should give you some time to think...
Posted by Nancy at 9:10 AM 3 comments:

We've Come This Far By Faith

We've just finished a weekend of celebrating God's work over the last 25 years at Reformed Presbyterian Church of Bowie.
We've only been there for just over nine of those years, but boy, are we grateful!  It was a wonderful weekend of playing, visiting, seeing old friends, and recalling what the Lord has done in this body of believers.  Duncan had a chance to speak at the gathering on Saturday evening about raising young children at RPCB and what a blessing it is.
There was a theme chorus of the weekend:  "We've Come This Far By Faith."  And we can't get it out of our heads today!  I had a chance to record my girls singing it this afternoon, so I thought I'd share their cuteness.  But more importantly, I thought I'd share the words, which ring so true at RPCB.  And for that, we are ever so grateful!
Here Violet sings in her typical manner.

And Amelie sings, in an atypical manner.  But the words are true, no matter how they're sung!

The words are:
We've come this far by faith
Leaning on the Lord
Trusting in His Holy Word
He never failed me yet
Oh' Can't turn around
We've come this far by faith!
Albert A. Goodson (b. Los Angeles, CA, 1933) wrote both text and tune in 1956 for the Radio Choir of the Fellowship Baptist Church in Chicago, Illinois, where he served as minister of music.
Posted by Nancy at 7:36 PM 2 comments: