On an ordinary Sunday afternoon...

...Amelie and Daddy decided they wanted to see what it would be like to be models. So we got out the camera and they posed for it. 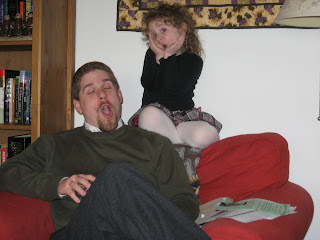 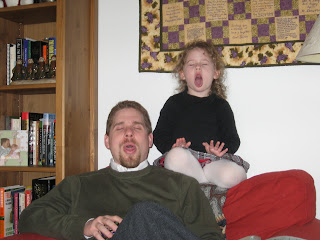 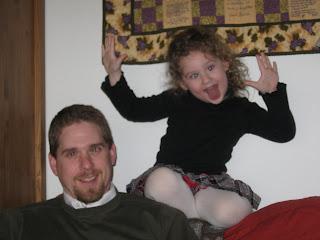 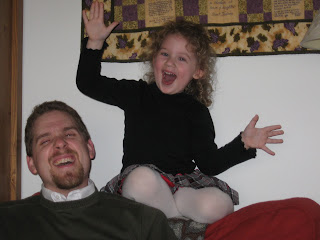 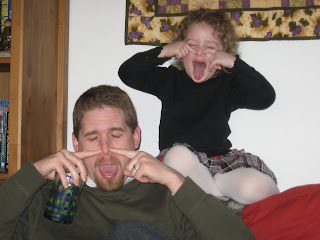 So what do you think? Should we look into getting them an agent? Do you think they have a future?
Posted by Nancy at 8:04 AM 2 comments:

This year, we had Duncan's mom and step-dad with us for Easter weekend. We worshiped at our church and then headed over to my parents' house for dinner and the Annual Cousins Egg Hunt. (We missed you Harknesses and Munros!) Here's a little glimpse at our day. 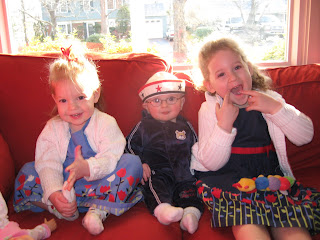 This is the best picture I got of my three cuties. 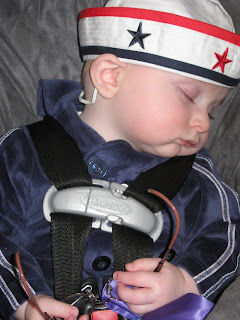 A common sight these last few weeks...glasses in hand rather than on face. 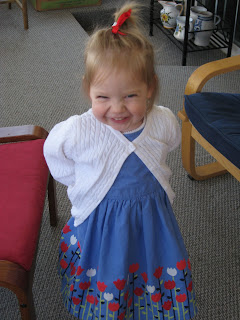 Any body ready for an egg hunt? This was the first time Violet had any clue. She had a blast! 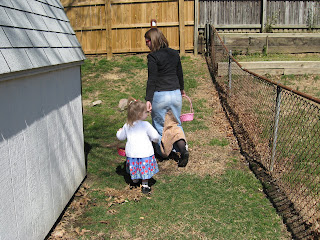 The oldest cousin, Erin, takes Violet around. Even though Erin's 20, she still participates! She's such a good sport! 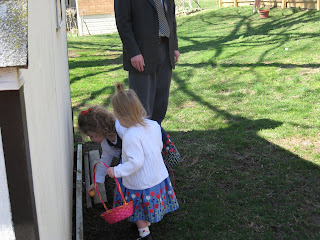 Amelie shows Violet how it's done. 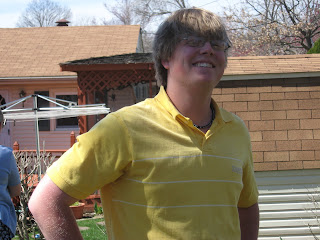 Patrick, the second oldest cousin at 18, is a good sport too. (Sorry, Meg, I didn't get any pictures of you for some reason =(.) 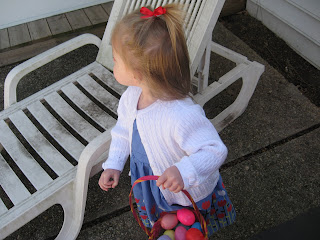 Once Violet got going, her basket got so full, she could barely carry it! 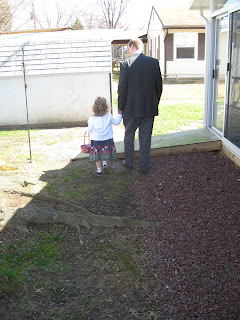 Amelie and Daddy check to see if they missed any eggs. 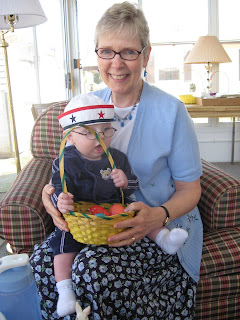 Linus and Ducky show off his loot.
Posted by Nancy at 7:33 AM 2 comments:

Ugh! Why am I having such a problem with blogging these days? I promise to post something substantial soon. Hold me to it.
Posted by Nancy at 7:47 AM No comments:

We must be popular or something!

The Saladas make it onto another blog today! Thanks, Heather! I need more friends that blog, so that I can just post links all of the time.
Posted by Nancy at 1:36 PM 1 comment:

It's nice to have friends that blog!

Something else I wanted to blog about? Rachel already did it for me! Go and check it out! To entice you even more, it involves Violet and ice skates!!
Posted by Nancy at 8:24 AM No comments:

Since my posting has been lacking and my e-bay auctions are up, I thought I'd post a sample of the things I've considered blogging about over the last few weeks.

1. With the girls' birthdays and birth stories over the last several weeks, Linus info has been seriously lacking! On Sunday, March 2nd, Linus Victory Salada officially became a Covenant child, as he was baptized. Apparently, his cuteness make it hard for folks to listen to the pastor's warnings and admonitions. He didn't cry and enjoyed his feet throughout the time we were in front of the church. 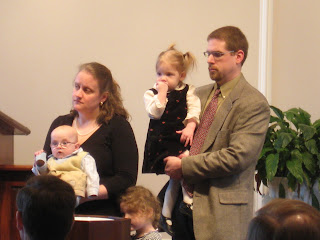 His baptism was witnessed by four of his grandparents, six of his cousins, four of his aunts and uncles, several friends and extended family members, and the majority of his church family. It was a wonderful occasion.

2. And speaking of Linus, he turned six months on Friday, February 29th. I could hardly believe it! We had his six month well check-up on the following Friday, March 7th. He weighed 14 lbs. 1 oz (5th percentile!) and was 26.5 inches long (60th percentile, I think). He's a peanut! Or I guess I should say he's lean, right Heather? He got five immunizations and checked out well developmentally. He's still slow in that regard, but he's progressing at his own rate. He rolled over five times yesterday, front to back. And he's liking tummy time more and more these day. We started him on rice cereal with formula once a day and he's had carrots too. He's doing really well with it! Here's a picture from before his first feeding. 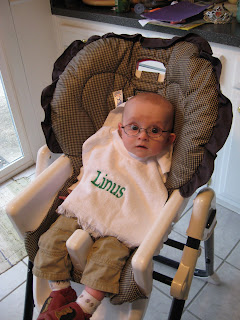 3. The time I've put into the e-bay stuff is obscene. I just tried to remind myself that this first time, I spent tons of time learning, which I won't have to do again. I hope that it's a good experience, in terms of successful sales, but I guess any amount of money over the cost of the listing fees is a good thing!

4. After months of feeling like many days of the week, particularly Amelie's school days, are hard, I've come to a realization. Life with three children is busy, can be crazy, is often hectic. A shower every other day is all I usually get. I've lost 20ish pounds since October, not by doing anything except living life. My children are full of energy and love and laughter. Life, from here on out, is going to be busy and often hard. But I can choose to sigh at the end of the day and say, almost complaining, what a hard day it was. Or, I can face each day as an exciting challenge and sigh with contentment at the day's end, for the richness of my life in this season. I get to color and play with play-doh, and play Old Maid, and read the same book over and over again, and go ice skating, and go for walks, and snuggle sleepy kids, and play pretend and peek-a-boo. I continually remind myself that in a few short years, I will miss all of it!

5. As a New Year's resolution of sorts, I decided that Duncan and I were going to go out on a date once a month. We've successfully done it three times already! He started it by trying to surprise me back in January. Then in February, we were invited to a couples Valentine's dinner at a friend's house from church, and then we went out to dinner this past Friday night. We laughed at how quickly the meal goes when it's just the two of us! I think we're both so used to eating so fast, so we can help little people with their meals, as well. It's been a good thing for us and I look forward to continuing it.

6. The ladies' retreat for our church is this Friday-Saturday and I'm very much looking forward to it. Linus is coming with me, of course. He was with me last year too, I guess! It's becoming a tradition!

I'm sure there was more I wanted to say, but that seems like enough for now. Hopefully, I'll get to leaving some comments sometime soon!
Posted by Nancy at 1:35 PM 4 comments:

Why hasn't Nancy been posting? Why hasn't she been commenting on my blog? Where she at?
I've got two words for you:
e
and
bay

I'm attempting to put up my very first e-bay auctions and it's WAY more work than I realized. I'm trying to sell a boatload of the girls' clothes. I have a friend that successfully dresses her children in very cute clothes (we're talking Hanna Andersson, Gymboree, Janie and Jack, etc.) practically FOR FREE, since she shops sales and then sells the stuff on e-bay once her kids have outgrown it. Since I've been bitten by the Gymboree bug, I've decided to give it a whirl. So, until these auctions are up and running, don't expect to see me around here or over your way, for that matter. Well, maybe I'll check in on you, but I won't be leaving a comment, that's for sure. Or, maybe...
Posted by Nancy at 10:27 PM 1 comment:

Naughty Mommy, or, Why Not?

What's the fun of having umbrellas and mud puddles if you don't actually play with them? 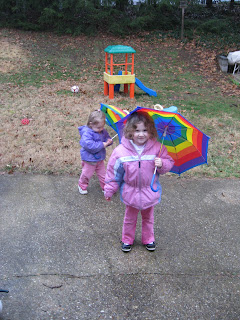 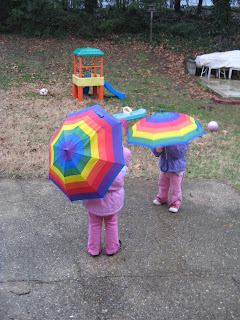 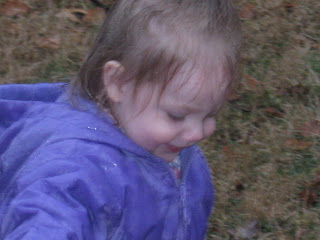 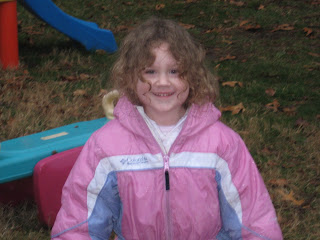 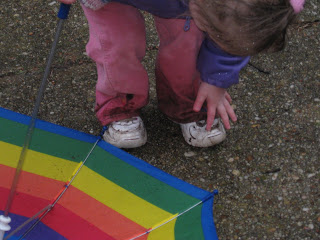 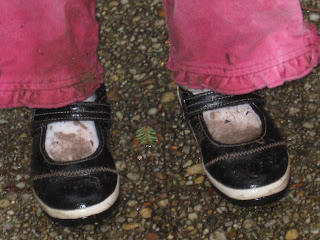 The squeals of delight while sloshing through the puddles made it TOTALLY worth it. I highly recommend this activity when you next have the opportunity.

Here's the naughty AND soggy mommy. She couldn't be happier about her decision. 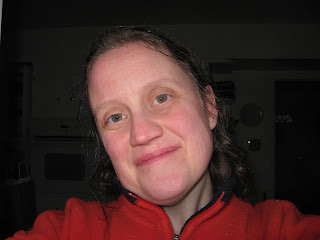